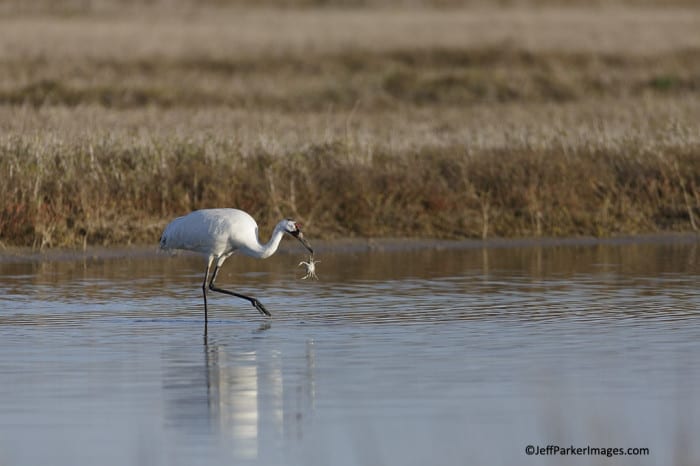 We were blessed with good weather for the 2014 Whooping Crane tour. With an ice storm Friday morning and another the next Tuesday we really lucked out even if it was a bit chilly on Saturday morning. This year’s group was interesting in that 3 of the 5 participants were retired Air Force pilots. Friends Rob Wilbourn and Howard Hackney signed up together and it was just a coincidence that we had a third ex-jet jockey, Tom Spellman, join the group. 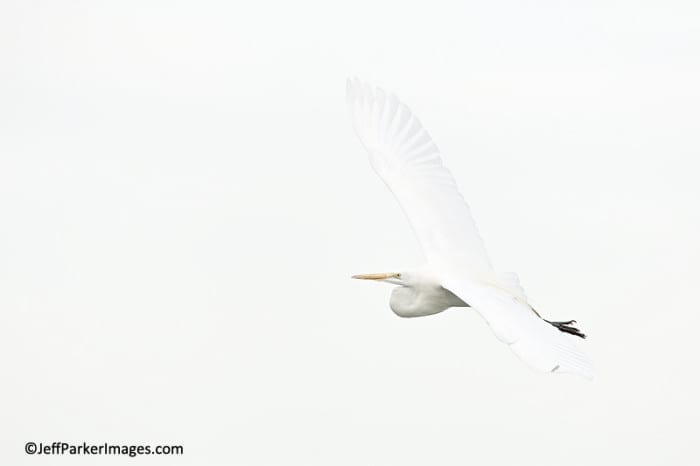 Although we had great success with the cranes, including a front row seat watching them pound open crab shells with jackhammer blows from that stout bill, my favorite shots of my own and the others were of other birds. Saturday afternoon we ventured to Cove Harbor Marina and we all captured some great images of the birds there. I like the white-on-white of this Great Egret flight shot. 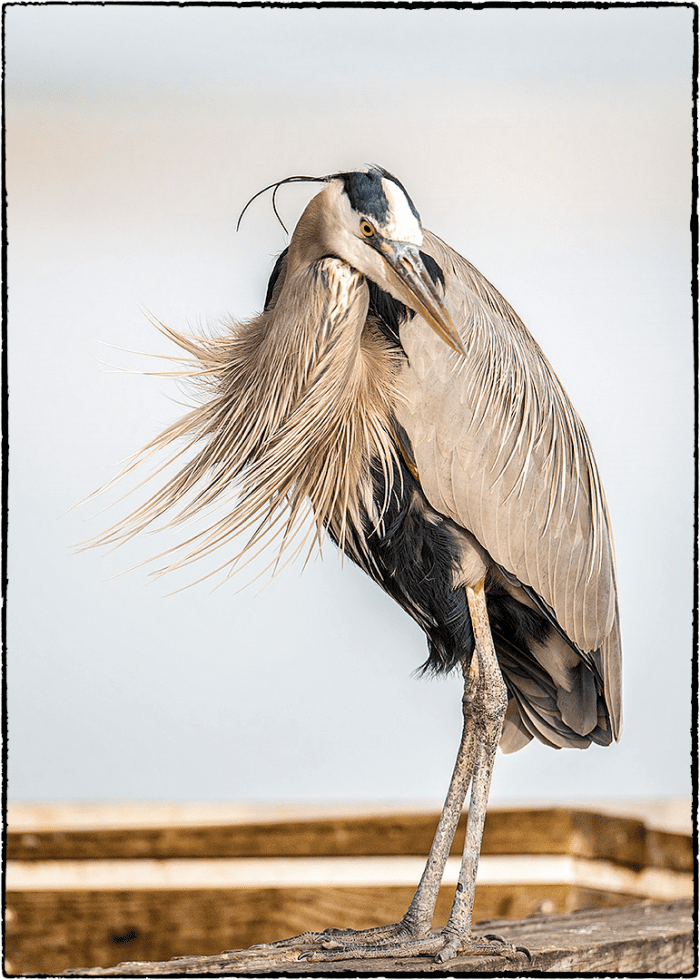 Initially we had gone to the marina on a report of a Great Blue Heron that had built a nest in easy photographic reach. The nest had blown down the day before, but we went anyway in the hope that they would be rebuilding. Sure enough there was a GBH in the reported spot and Rob Wilbourn captured this image after it came down from the former nest site. 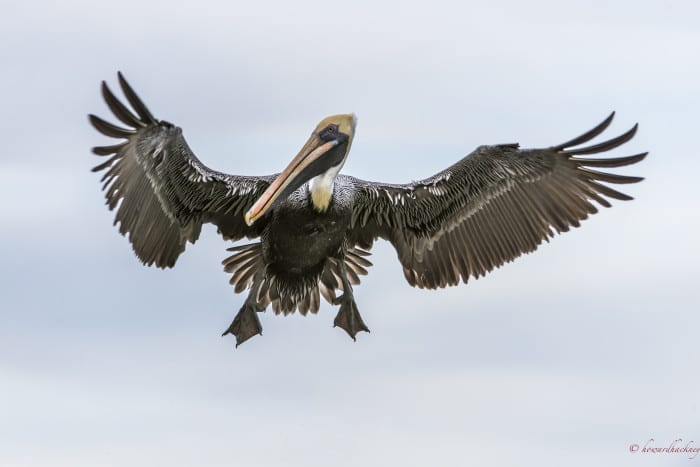 It didn’t take long to exhaust the photographic possibilities of the heron so we moved to the cleaning station where some sportsmen were cleaning their catch. Howard Hackney got this gorgeous shot of a Brown Pelican as it came in for a landing and a free handout. 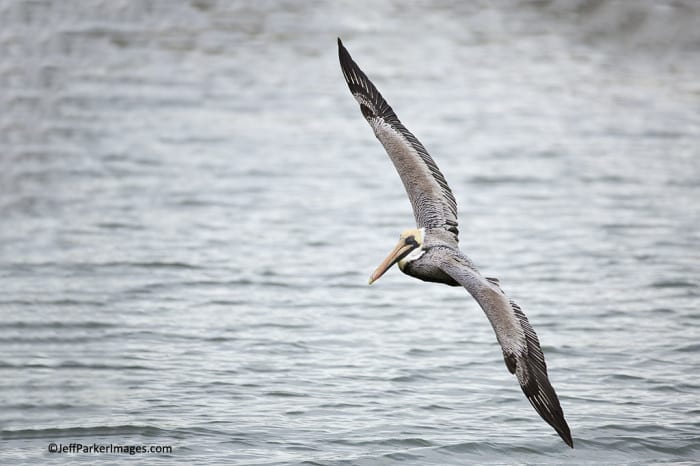 Howard’s shot makes mine look positively pedestrian. I probably should have gone back to the car and grabbed my 100-400mm lens. The “Big Gun” aka 600mm is not always the best tool for the job. I got lots of shots with cut off wings, heads, etc. However, it was great fun trying to capture the action as the birds came flying in. 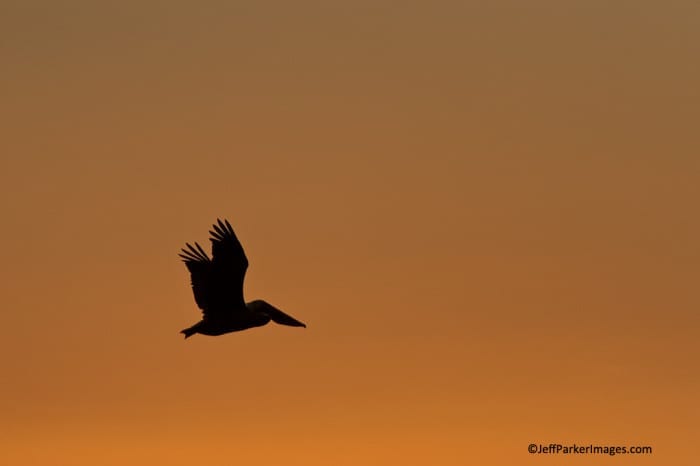 The next morning was about 10 degrees warmer which made everyone’s day. We got away from the dock before sunrise to be on site for that sweet first light. I was able to grab a shot of this pelican silhouetted against the sunrise sky as we were enroute to our morning rendezvous with the cranes. 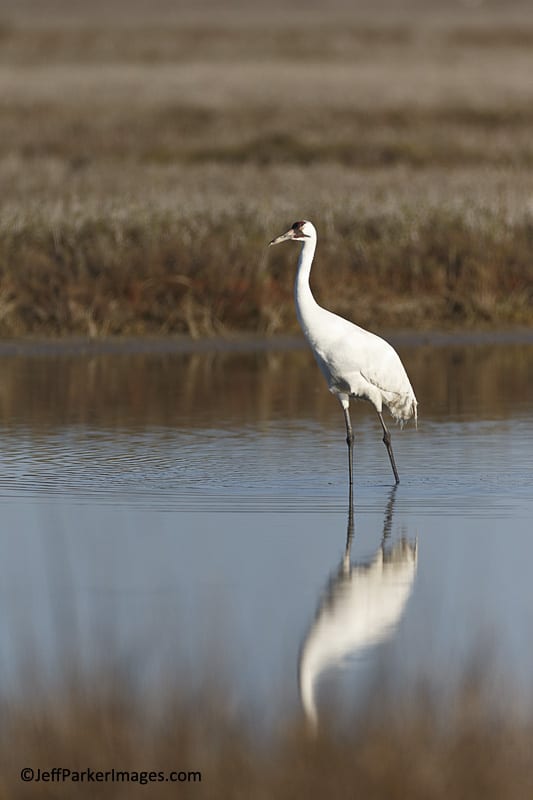 As usual Captain Kevin Sims put us on the birds. The result? A great morning watching wild Whooping Cranes feed and go about their daily lives. At one point one of the cranes looked like it was just going to keep working closer until it was on the boat with us! 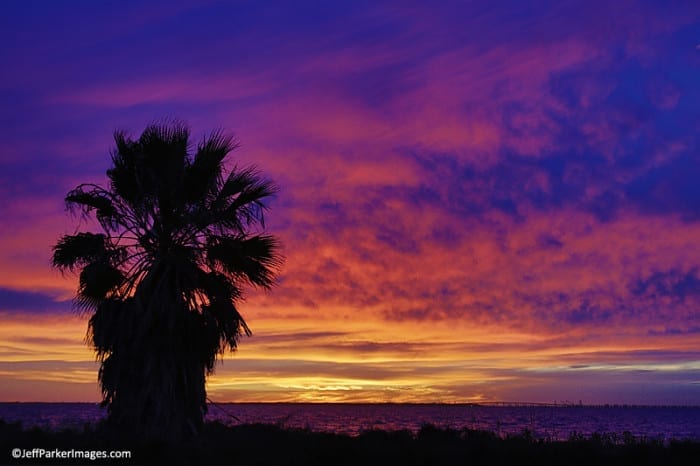 Rockport, Texas Sunset. This image was not altered in PhotoShop. It was an amazing Gulf sunset! ~ ©JeffParkerImages.com