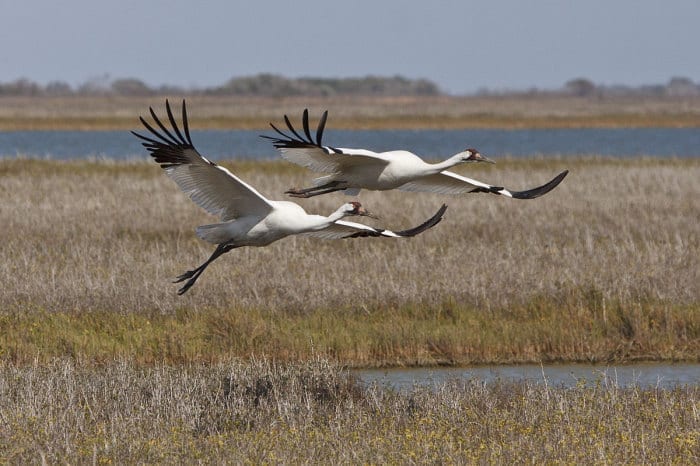 Endangered Whooping Cranes (Grus americana) have returned to the Texas Gulf and will remain until early-spring.

The “Whoopers” have returned to the Texas coast and will be with us until early-spring, prompting me to write a little about these big birds that I love so much.

Whooping Cranes (Grus americana) once bred over much of the United States, but, by the early 20th century, none could be found breeding here.

In the 1940s, the birds sat perched at the edge of extinction; some say numbers had fallen to 16, while others quote 21, but no one debates the fact that we almost lost them all. It was not discovered until 1955 that this remnant flock was breeding in Wood Buffalo National Park in northern Canada.  (This amazing park, by the way, is a UNESCO World Heritage Centre.)

They were officially listed as “endangered” on March 11, 1967 under the Endangered Species Preservation Act of 1966.   And still are even though we have a lot more Whooping Cranes now than we did back then.

But we still don’t have enough. Today, their numbers vary annually but average merely 600 birds in the wild (even with a lifespan of up to 24 years). Of that, approximately half migrate to the Texas Gulf in the fall each year. I look forward to their return and photographing them every year! 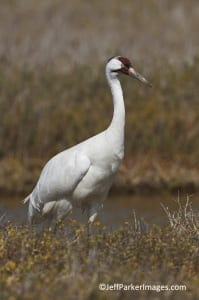 In 1937, Aransas National Wildlife Refuge was established to protect their Texas wintering grounds. The flock here travels an amazing 2,500 miles each year down from Canada, and is composed of descendants of the last wild flock.

Adult “Whoopers,” as the birds are affectionately called, weigh about 15 pounds. As the tallest birds in North America, they stand up to 5-feet tall and have a 7 ½ foot wingspan.

Distinguish them from other cranes by their long black legs, all-white bodies, red “caps” on the tops of their heads, and black facial markings and wingtips. They also sound-off with loud, goose-like honks.

Whooping cranes often mate for life.  The birds are ground-nesters and both parents contribute to the raising of the young. Of the two eggs per clutch, usually only one survives. Cinnamon-colored chicks are born in the summer and grow quickly—about an inch a day!—as they must be ready for the long flight southward by early fall.

The juveniles that come to the Gulf are about 4-6 months old and, while they can fend for themselves, you’ll often see them “begging” their parents for food.

I love watching the juveniles!   If you spot a not-yet-solid white bird tagging along behind a couple of Whoopers, begging incessantly, and noisily, then you’ve spotted a juvenile. Get your lens ready because it’s probably about to grab a Blue Crab from its parents!