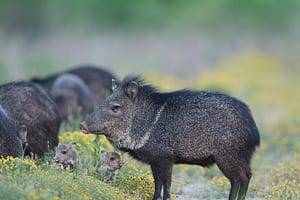 The Javelina (have-a-leen-ah) has a special place in my heart. My first award-winning photograph (below left) was a javelina and my first magazine cover (in Texas Wildlife, a mother with her babies — right ) were both Javelina shots. 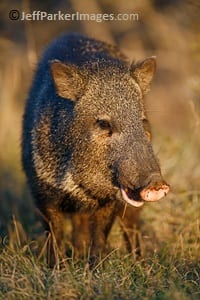 This pig-like critter is not in the same family as pigs. The homely Javelina is actually a peccary. There are 3 species of peccary with the Javelina being the only one found in the United States. They can be found in Texas and Arizona south to South America.

Sometimes confused with feral hogs, Javelinas don’t get as large nor do they tear up large areas with their rooting as hogs do. They are omnivorous but mostly eat plants and roots, with a particular taste for prickly pear cactus.

Javelinas have a reputation for ferocity that is mostly myth. Yes, they will slash open a dog that charges into their midst barking and biting. That is self defense and you can’t blame them. The tales of them attacking people always seen to happen to the brother-in-law of your hunting buddy’s wife’s cousin.

I think the misunderstanding comes from the fact that Javelinas don’t have great eyesight. If they catch wind of you they will bolt in all directions. Sometimes inadvertently towards you. If they see you but don’t smell you, they may stand their ground popping their jaws and raising the hair on their back as they try to figure out what you are. I have spent a lot of time with Javelinas in many areas of Texas. In all cases they either ignore people or run away. I’ve walked into groups of them on ranch land and had them burst through the brush in every direction and I’ve had to physically push them out of the way in Big Bend National Park.

I always enjoy watching and photographing Javelinas. They are another piece of the puzzle that makes south Texas so special. 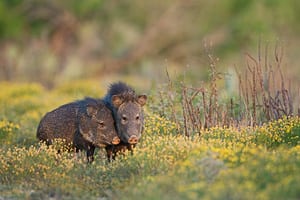 Check out my article, Best Ways to Photograph Javelinas, on the Apogee Photo Magazine website.

SOUTH TEXAS PHOTO TOUR:  I run a photo tour at special photo ranches in South Texas about once a year.  If you’re interested please be sure to check my “Join Me” section regularly.