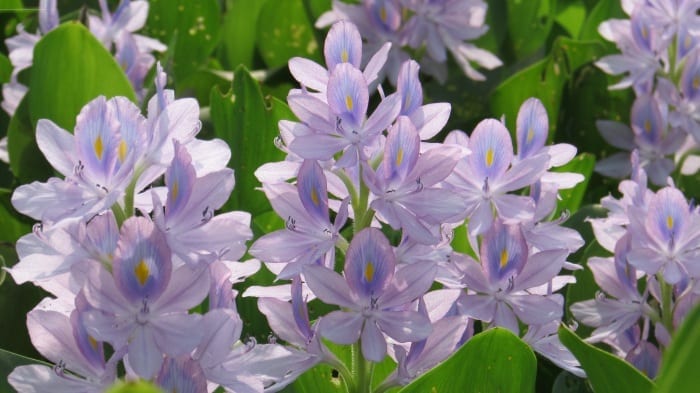 October 19-25 is Texas Native Plant week 2014. This got me thinking about Water Hyacinth (Eichhornia crassipes) and Monk Parakeets (Myiopsitta monachus) in particular. Why those two species?

Just last week I returned from leading a photo tour in the Brazilian Pantanal–—a wonderful wildlife experience that I will write about some more another time—–and both species were plentiful there.

They’re also native to the Pantanal. That means they belong there—not here. There, they have mechanisms to keep them in check. There, interdependencies with other plants and animals of the region mean they play vital roles in a healthy ecosystem. In fact, the Pantanal is one of the healthiest ecosystems I’ve ever seen.

Water Hyacinth plays an important part of making things work right there. It filters the water at the heart of the wetlands. The Capybara, a keystone species there, feed on it. An umbrella species of the region, Jaguar, in turn, eat the Capybara. See the connection?

Water hyacinth has a beautiful bloom that you’ll spot in many of Texas’ and other southern states’ waterways. Monk Parakeets are not necessarily a problem, but are increasing in Austin and surrounding areas. So what’s the big deal?

They don’t belong here, that’s what.

Water Hyacinth is actually a detriment to non-native ecosystems. It crowds out native water plants then does little to sustain our native wildlife. (See this article by my wife, Mary O. Parker on the topic if you’re interested in learning more.)

If you live in the southeastern U.S. you’ve seen (and likely felt) firsthand the effects of Brazilian Fire Ants (“Red Imported Fire Ants”). Biologists believe they could be a major cause for the reduction of Bobwhites, Eastern Turkeys, Horned Lizards, and other native species.

Brazilian Pepper trees are a problem in places like California where they can crowd out native plants that resident insects and birds need for survival.

Non-native plants and animals have the potential to run rampant because there is nothing to keep them in check. Which is exactly what has happened with Water Hyacinth here in Texas where there are no Capybaras (and other such critters) to eat them. Those gorgeous blooms are not only exotic, but they’re invasive, too.

Because native plants belong here they support the life that belongs here. Plants imported from South America, Africa, and Asia do not. Thus, it’s important to use native plants as much as possible in your landscaping.

Organisms like birds, butterflies, and even mammals, utilize native species for food and shelter. They rely on them and, in many cases have evolved symbiotically with them. This is key! Without the native plant with which they have that special relationship, many species are in big trouble.

A thicket of Chinese Tallow or Japanese Ligustrum is not much different than a parking lot to our birds, insects, and other wildlife. (Check out this PDF from Texas Parks and Wildlife Department for more on this topic.) When choosing trees, pick something that will benefit wildlife instead.

That lush, green St. Augustine lawn? I don’t mean to offend those of you who love your St. Augustine, but it’s a biological desert. It supports no real life, while requiring enormous amounts of water and chemical poisons known as pesticides, herbicides and fertilizers, which, due to run-off, damage innocent bystanders that live no where near your lawn (yes, even most fertilizers).

There are alternatives. For example, check out this cool option. Mary likes a lawn (I’m not keen on one) so what she did is planted Buffalo Grass and then just lets whatever native grasses come up on their own be part of what we call the “non-lawn.” Buffalo Grass takes little water, needs little mowing, no fertilization, and can take the sun much better than St. Augustine. As far as pesticides? That’s what birds and reptiles are for!

For trees, shrubs and flowers there are plenty of native species you can utilize that are not only beautiful but will reward you with an increase in life as your local birds and butterflies find the table you have set for them.

If you are not sure about what plants to use, contact the Native Plant Society and/or your local Texas Master Naturalist chapter. Even if you don’t live in Texas these folks can get you going in the right direction.

While this is written about Texas, the same principles apply no matter where you live. Go native and your local wildlife will thank you.

Go native and watch how much more vivacious your yard becomes. It will amaze you! Your soil and water will thank you also as you reduce the amount of chemicals going into them.

As we photograph native wildflowers during my “Wildflower Photography Workshop ~ 2016.“