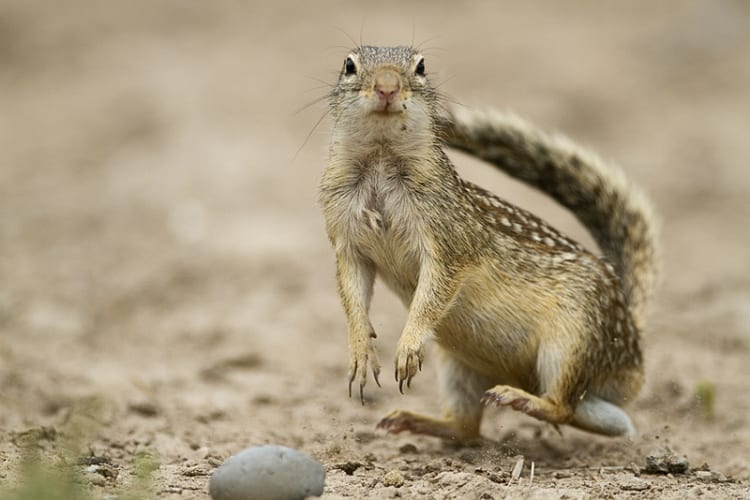 Watching — and photographing — the quirky Mexican Ground Squirrels that live in the South Texas Brush is a lot of fun. Copyright ~ Jeff Parker

I’ve created these “Five W’s” of Photographing Wildlife in the South Texas Brush Country to help others when they head that way:

With your first glance at the South Texas Brush County you’ll swear — just as Spanish explorers did in the 1500s — that you’ve arrived in a barren no-man’s-land. The acacia-ridden, thorny landscape seems bereft of life. But, in this case, looks really do deceive!

Harris’s Hawks dot landscapes and skies everywhere here. These white and rufous colored birds are North America’s only raptors known to engage in cooperative hunting, usually in pairs or trios. Another photogenic South-Texas raptor is the Crested Caracara. Get great action shots as these falcon-family members battle it out with Turkey Vultures over carrion meals.

The giant — but gentle — Texas Indigo snake calls the Brush Country home, too, sometimes at lengths of up to 9-feet. Unless you’re a rattler — a favorite meal — you won’t consider this Texas state threatened-species aggressive. 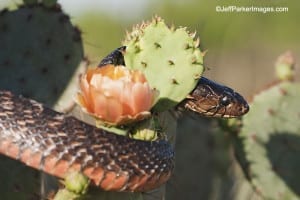 The state-threatened Texas Indigo Snake is very gentle ~ probably a big reason its status is at risk. Copyright ~ Jeff Parker

Coyotes make great photography subjects, too. Listen for their evening howls, which often signal to family-group members that time’s come to reunite after a stint of individual hunting. The canines come out during the daytime, too, and photo ops abound at the right photo ranches.

And, of course, come also to photograph a special South-Texas legend — the Javelina (“have-ah-leena”). These nearly-blind Collared Peccaries rely heavily on their sense of smell and one another as they travel in herds.

Scientists classify South Texas as a “semi-arid, sub-tropical” region. The result? Lots of biodiversity, a large number of bird species living at the far northern edges of their ranges, and warm weather most of the time.

South Texas winters bring occasional cold snaps, but they never last long. Overall, precipitation is sparse and unpredictable, although late summer and/or fall can bring periods of heavy rain if a tropical system makes landfall since the region lies close to the Gulf of Mexico.

By late May temperatures turn hot (around 100°F/38°C). While that’s bad news for most humans, it’s good news for wildlife photographers because the animals grow more active (see “When”).

While South Texas has plenty of amazing mammals and interesting reptiles, its primary photographic subject is its birds. Most of those known as “South Texas Specialties” are the year-round residents I noted above. However, spring migration dramatically boosts the number of species to focus on, especially along the coast. 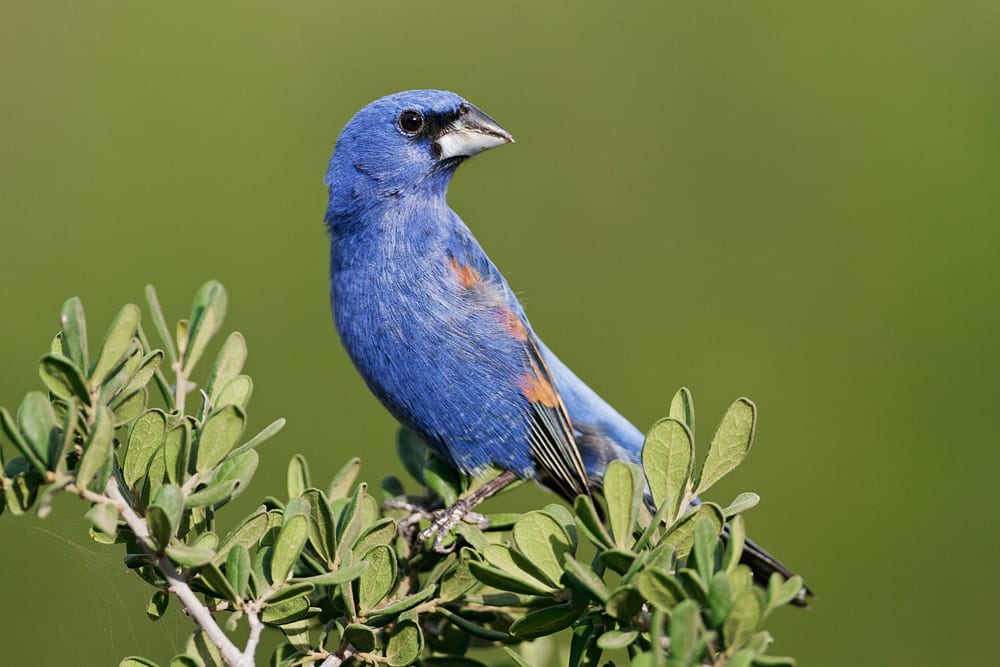 Peak migration occurs in mid-April and a fall-out on the coast can bring a marvelous photographic experience. By the end of April the summer breeders, such as Painted Buntings, Varied Buntings, and Scissor-tailed Flycatchers have arrived.

The best photography occurs when the animals are hot and thirsty. They flock to water to drink and cool off. Painted Buntings, in particular, really like their baths! This makes late-May and June prime time for South Texas Brush Country photography. But prepare yourself for the heat! When the animals are hot and thirsty, you will be too! (see “What”) If heat gives you trouble, April to early-May will work better, but temperatures will still be on the very-warm side.

South Texas is blessed with several parks, preserves, and nature centers for birds, butterflies, and other wildlife. However, if your goal is photography rather than observation, I highly recommend one of the private ranches set up for photography. These private lands have blinds designed specifically for photography. They take into account factors like light direction, backgrounds, interesting perches, and water features. You’ll see birds and animals within 20-feet of you, going about their lives in full view of your lens. Many photo ranches even have specially created raptor blinds.

When you head to one of these photo ranches, not only are you supporting private land owners who support biodiversity, but you’re getting a superior photography experience. Bottom line: in my opinion, South Texas photo ranches offer one of the best opportunities in the United States today for the wildlife photographer.

If you do decide to go public, I recommend one of Texas’ nine World Birding Centers since there you’ll also get to learn about the local avian species. But keep in mind that these places aren’t designed for photographers. Instead, they’re created for viewing birds. Backgrounds, set-ups, and lighting will be inferior—though, but that doesn’t mean you won’t get some keepers.

I suggest you bring a big lens to South Texas for two reasons. The first has to do with what you’ll be photographing: primarily small birds. The second reason is because of where you’ll be photographing. Chances are if you head to South Texas to do photography you’ll make at least one trip to a photo ranch and take advantage of their special set-ups. There you’ll need at least a 500mm to get the keepers you want to take home and show off. 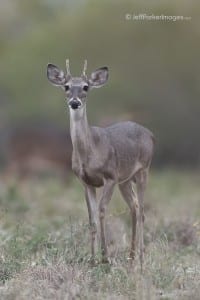 Whether you decide to pursue images at a photo ranch or a World Birding Center, you can get satisfactory results with a 400mm. However, I promise you, you’ll be happier with a 500mm (or even larger). Little bitty birds are best photographed with great big lenses!

You will need a good, steady tripod to support that big lens. Tripods make for better images no matter what type of photography you enjoy, but trying to hand-hold a super telephoto nearly guarantees a less than sharp result.

I prefer a gimbal style head on my tripod. With a gimbal head you can balance your rig so that it stays in any position when you let go of it. I don’t usually work with a ball head when photographing wildlife because, with it, you run the risk of your lens flopping over as soon as you take your hands off. (I do use one with landscapes, however.)

Think of the clothing you pack for the South Texas Brush Country as part of your gear as well. I consider a hat, sunscreen, and water “musts” when photographing here. Most photo ranches keep an ice box stocked with water in their photo blinds. Drink water whether or not you feel thirsty as it’s easy to grow dehydrated quickly with such high temperatures.

When it comes to field work, I don’t recommend shorts as most vegetation bears thorns. What ever clothing you do bring, however, I suggest treating it with a Permethrin product before you go to discourage ticks. Because of the thorny brush, bring thick-soled shoes for the field. Tennis shoes don’t protect well enough considering that the average mesquite thorn measures nearly 1-inch long (about 3 centimeters).

Let me know if you have any questions about photographing wildlife in the South-Texas Brush Country. As I’ve noted, it’s truly one of my VERY favorite places so I’ll be happy to burn your ear about it all you’d like.

I lead photo tours there often. We photograph wildlife at the best photo ranches in South Texas so if you’re interested in joining me, check out my Join Me section to see what I’m currently offering.