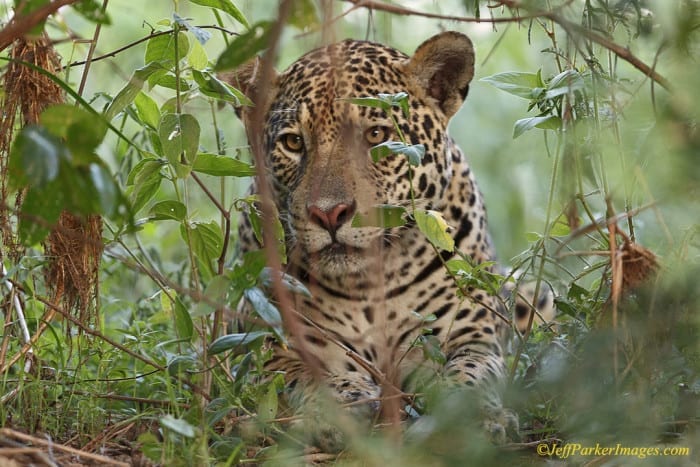 “Pantanal!”—a word that conjures up images of jaguars, capybara, caiman, Jabiru Storks, and Hyacinth Macaws…truly “Oh my!” “Pantanal” equals neotropical wildlife photography at it’s finest. Here, seeing the normally elusive Jaguar is as close as you can get to a sure bet.

In 2014, I had the privilege to lead a photo tour to this mythic land. [NOTE: And again since then. In 2016, we photographed ocelots, too!] The experience delivered everything I had hoped for. It would’ve been cool enough to see a jaguar, but I wasn’t prepared for daily sightings, often lasting quite a while. What a treat!

During our five days in the midst of Jaguar Country, we photographed at least five different cats. Some we saw more than once. (A special shout out to the beautiful Bianca!) The cats are observed and photographed so frequently that they can be readily identified -—thanks to facial markings that help tell them apart.

But, as cool as they are, jaguars are only a part of the Pantanal story. Giant Hyacinth Macaws can be photographed from six feet away. Abundant caiman and capybara also star in this wild “show.” In fact, their abundance is responsible for the high density of Jaguars as the two creatures provide most of the cat’s meals.

If you’re lucky you’ll get to watch—and photograph—male caiman doing their water dance. When males set to bellowing to attract females and discourage competition, the vibrations they create cause the water on their backs to “dance,” much like water drops on a hot skillet. We witnessed this only during our early morning photo shoots (another good reason to head out before sunrise!).

Giant River Otters aren’t necessarily abundant but neither are they elusive. We enjoyed several close encounters with these 6-foot long carnivores, photographing them as they played and hunted. As they swam and dunked and crunched (they sometimes came so close we could hear them chomping on a fish) they paid us no mind. 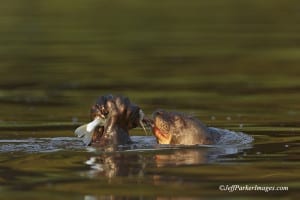 Birds abound here. Hyacinth Macaws and Jabiru Storks serve as large (in fact the largest of their respective groups), charismatic symbols of the Pantanal. No wonder! Hyacinth Macaws, with their striking cobalt blue plumage and yellow clown faces, truly are stunning. And, well, Jabiru Storks aren’t exactly beautiful, but they, too, are striking. Both are easily photographed when you find them. 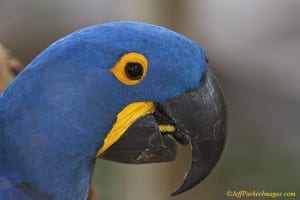 Kingfishers also made popular subjects for our lenses. Four species of Kingfishers and multitudes of fish meant we never had to wait long before seeing another one of the big-headed birds. Hawks also filled the frame on a regular basis. Beautiful Black Hawks and Black-collared Hawks frequent the waterways, providing plenty of photo ops. And, while not as common or good looking, Yellow-faced Caracaras also put in an occasional appearance.

While folks don’t usually think of primates when Pantanal comes to mind, they’re here and they, too, are fun to photograph. We got great images of black howler monkeys and brown capuchins. I really wanted a shot of a black-tailed marmoset; however, it wasn’t to be. I glimpsed them a couple of times but no photos. Maybe next time!

We had better luck with the brown capuchins. During a group hike, we stopped at a canopy tower to take a break. One member of our group climbed up the tower to look around. While she was on top, a troupe of capuchins came through, rowdy and active! We all got great photos as they peered at us from eye level. A couple even scampered partially up the tower.

When our tower-climbing companion returned to join us, she told us, “There’s a nice view and a refreshing breeze up there, but I didn’t see any wildlife.” Image her puzzlement as we doubled over with laughter! Luckily the monkeys came back through and she, too, had a chance to create some great images. One of them even put on an act, doing handstands and jumping about on the platform.

So many memories! I can’t wait to get back and create new ones.
UPDATE: Join me in August 2018 as I return for my third Jaguars of the Pantanal Photo Tour…can’t wait! 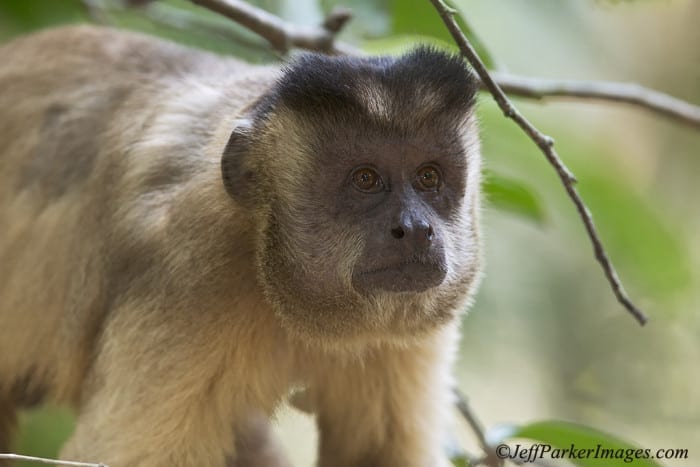