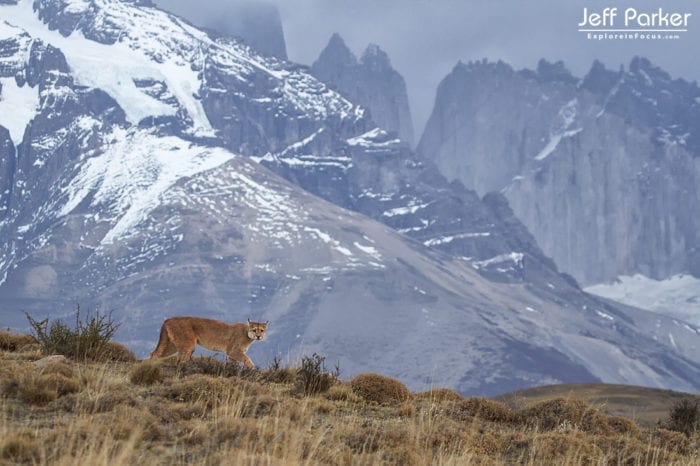 Puma wild and free in Patagonia.

I know you’ve seen the shots. The mountain lion leaping from one red rock to another. The close-up of the beautiful, fluffy wolf. The stunning snow leopard slinking through the snow.

I can virtually guarantee these are shots of game farm animals. I feel like these shots cheat the viewer, the animal and even the photographer.

The viewer thinks that photographer had spent days scouting for the animal, patiently waiting in the cold and then nailing the perfect shot when the elusive quarry finally reveals itself. What would that viewer think if he knew the reality was the trained animal was let out of a crate and commanded to jump multiple times until everyone got the shot? Or was taken from its kennel to a slightly larger enclosure with natural features while the photographer clicked away?

It might still be a great image of a beautiful animal but it’s about as magical as photographing your dog.

There’s been much written about the treatment of animals at game farms so I’m not going to get into that. Just please be aware of where your money is going and what it’s supporting.

For me the one who is really cheated is the photographer. Cliché I know, but isn’t life about the journey? By going to a game farm you’ve missed out on a whole experience. You will return home with memory cards full but what about your own memories? There is the whole environment the animal lives in to experience. The sounds, the smells, the wind. And then there are the other animals and photogenic subjects also living in that environment.

A prime example occurred on the first morning of my Jaguars of the Pantanal Photo Tour. Our guide wanted to head out at 9am because that would give us a better chance of spotting jaguars. I wanted to already be underway as the sun was coming up. As photographers it’s all about the light and I felt there would be plenty to photograph besides jaguars. He reluctantly agreed.

What an adventure we had! As the sun began to come up mist rose from the water’s surface. Yacare caimans began to bellow and do the “water dance” in the morning mist. A group of giant otters surrounded our boat. They would pop up within a few feet, crunching away on a just-caught fish. Such fun to watch them cavort and play! There were birds galore calling and feeding. And monkeys.

When we came in for lunch the guide gave me an “I told you so” expecting that we regretted our choice. My response was that we had a fantastic morning! We witnessed so much and took many photos of the other denizens of the Pantanal. We got plenty of jaguars on that trip, but we also went out before sunrise every morning and surrounded ourselves in the experience. 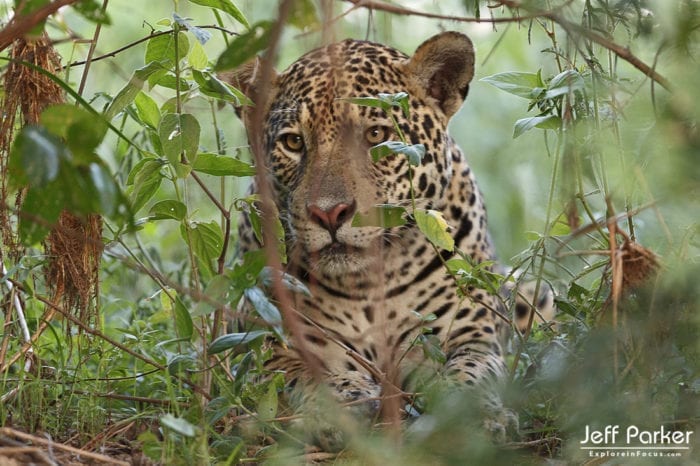 Wild jaguar at home in the Pantanal 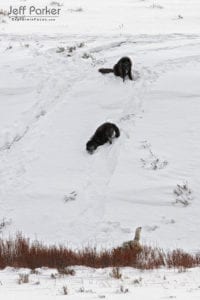 Wild wolves playing in the Yellowstone snow. A terrible photo, but an amazing memory!

In 2007, Mary and I ventured to Yellowstone in the winter. We spent several days in Lamar Valley looking for and watching wolves. Sometimes watching wolves sleep.

One of my most treasured memories is of watching a trio of wolves playing on the snow covered bank of the river. They would slide and tumble down in the snow and then race back to the top to do it again. Over and over again.

Did I get the shot? No, they were too far away for the shots to be much. But I had the experience. I stood in the cold, surrounded by snow covered mountains watching wolves play. Hearing them howl. Seeing them test the fitness of some bison.

Any time I think of those wolves and that day it makes me happy!

Snow leopards are on my bucket list. I could easily go to a Montana game farm and get as many shots as I want.

I may not even see a snow leopard. But you know what? That’s OK. I will still have the memory of the journey and all that I experienced in the quest.