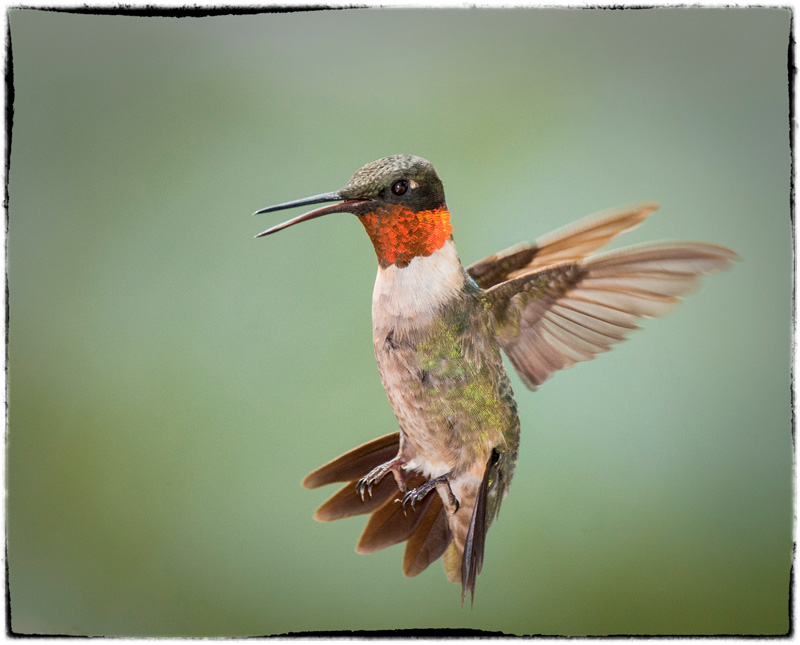 The 2013 Hummingbird Photography Workshop is a wrap and a great one at that! We had a good number of hummingbirds and a great group of enthusiastic participants.

Two stations set-up for multiple flash allowed participants a chance to create some great “freeze all the motion” hummingbird photographs. Several other feeders about Red Belly Ranch provided lots of opportunities for available-light photography. One feeder, in particular, proved much more popular with the hummingbirds and all that action tended to draw the attention of the photographers as well.

Participants had a chance to learn some new skills and perfect old ones. Fill flash was one item that – thanks to that extra-active feeder –ended up getting lots of use and practice. 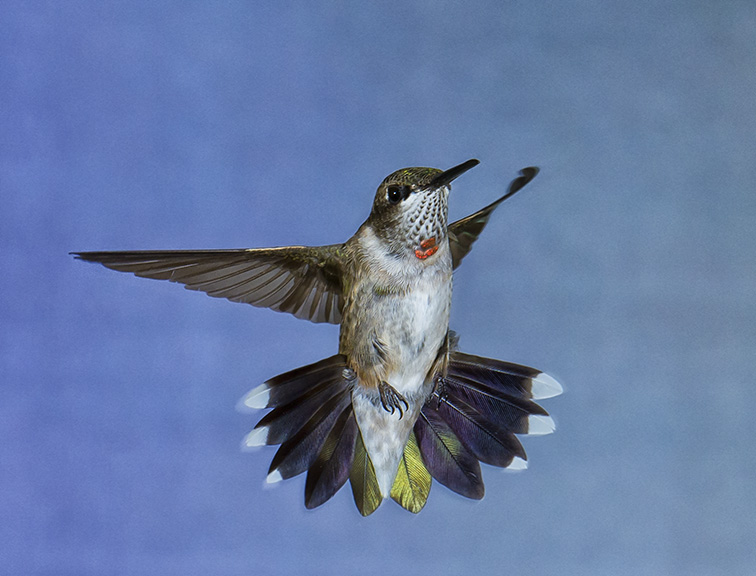 Those that could tear themselves away from the activity at the hot feeder and exercise some patience, were rewarded with the stop-action shots at the multiple-flash setup.

Paul Munch got this really nice shot and unique pose of a juvenile male that clearly shows the bird’s gorget as it is just starting to appear. 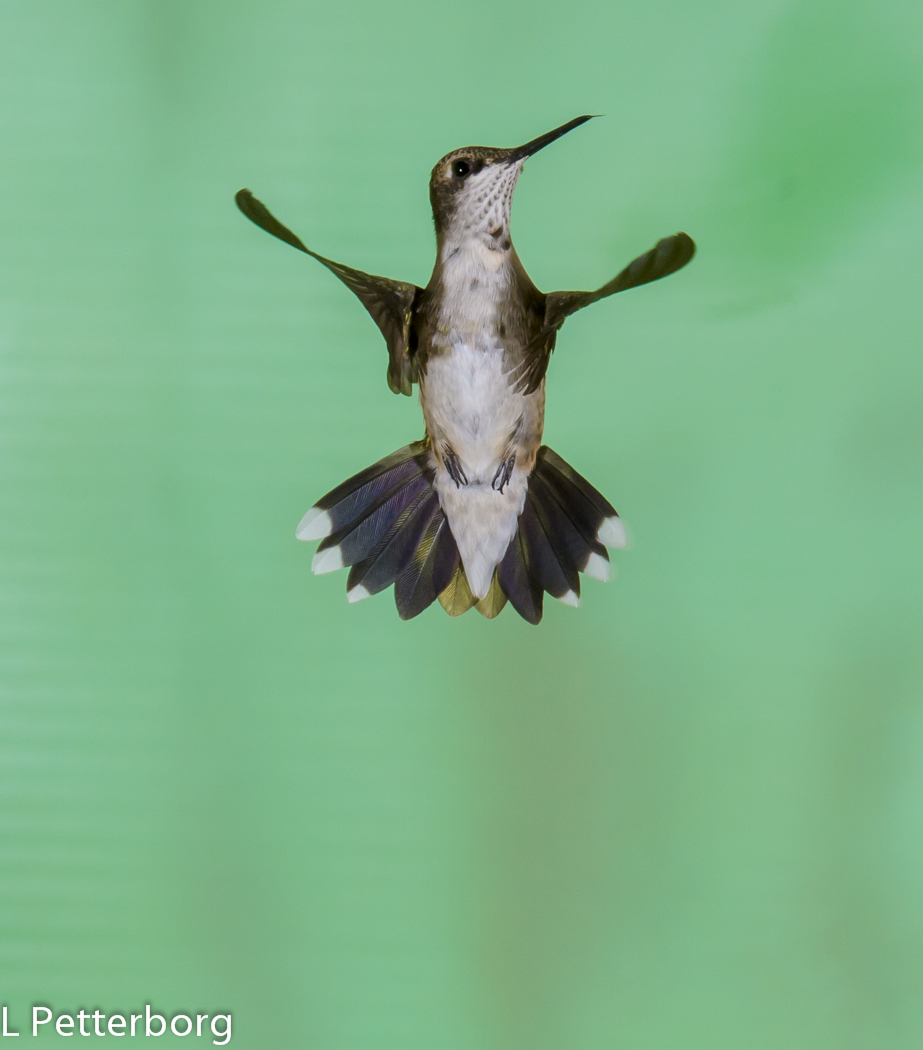 I love the pose captured here by Larry Petterborg at the flash setup. This demonstrated the figure eight pattern that hummingbirds use in their wing-strokes. The only way to capture this is to use the multiple-flash. Otherwise it will always be a blur as you just cannot get a fast enough shutter speed to stop this action. Larry worked patiently to get the shots he was after and also enjoyed experimenting with different backgrounds. 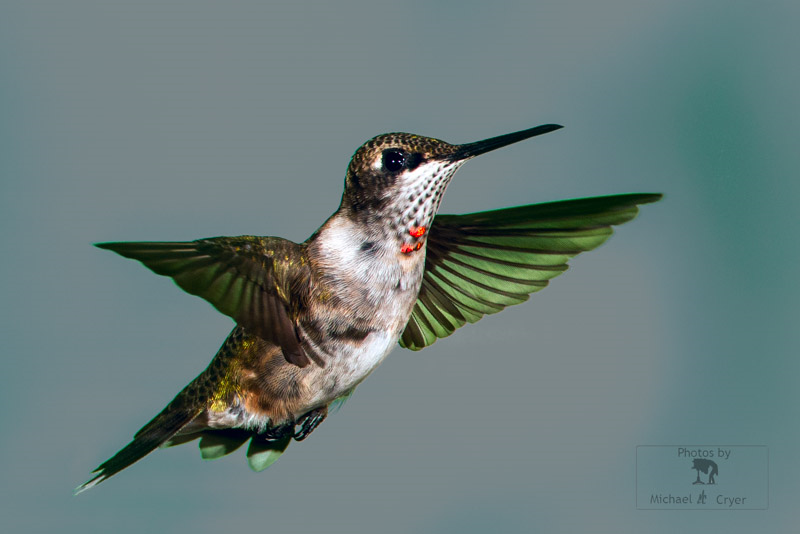 Another flash shot, this one from Michael Cryer, shows just how well you can bring out the iridescence created by the oval-shaped platelet cells of these tiny birds. The gorget on this juvenille truly shows you why these birds are called “ruby-throated” even though this male hasn’t even finished getting all his color. That green wing is a nice touch, too – made possible with the use of flash. 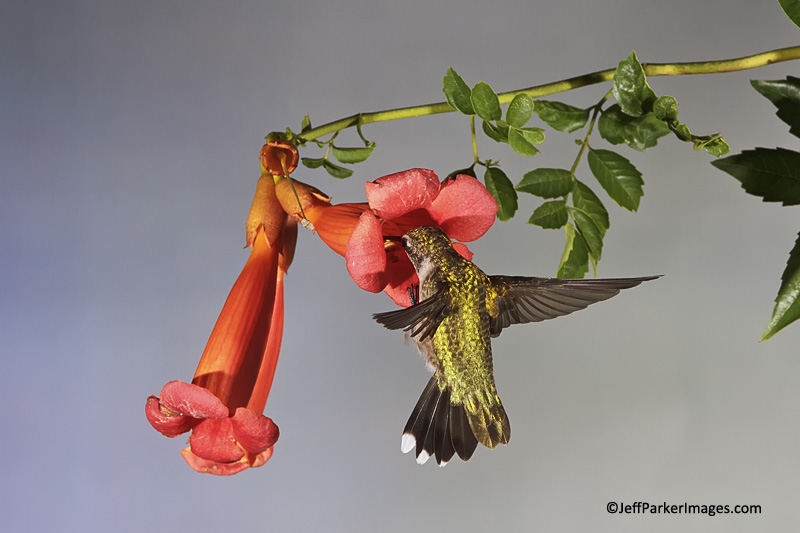 I don’t photograph during my workshops, but after everyone left I grabbed my camera and got creative. I added a Trumpet vine flower to the flash set for a bit of added interest.

These vines are native to the area and the hummingbirds love them! If you look at how deep the flowers are you can get a feel for how long a hummer’s tongue is. (Yes, they lick the nectar; they don’t suck it.) You can also get a feel for the bird’s length: each flower measures about 2″ long. 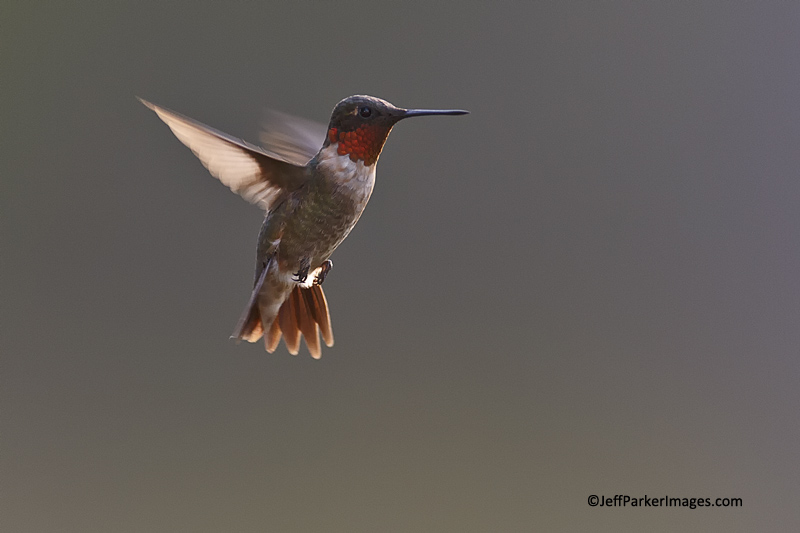 I noticed the light streaming through the wings of the hummingbirds late in the day at the “hot” feeder. This was made a bit more magical since we’d just had a late-afternoon rain shower. I decided to try for some backlit images. My images would’ve worked better with some fill flash.

To get a good exposure of the bird without fill flash the wings are pretty much burned out. A technique to work on for the workshop next year.

Thanks a bunch to all who came this year! We had a great mix of beginners, those who simply love hummingbirds, experienced wildlife photographers, and even someone who was a landscape photographer years ago has returned to nature photography. And a special thanks to all who contributed images for this blog. If you still want to share, it’s not too late! 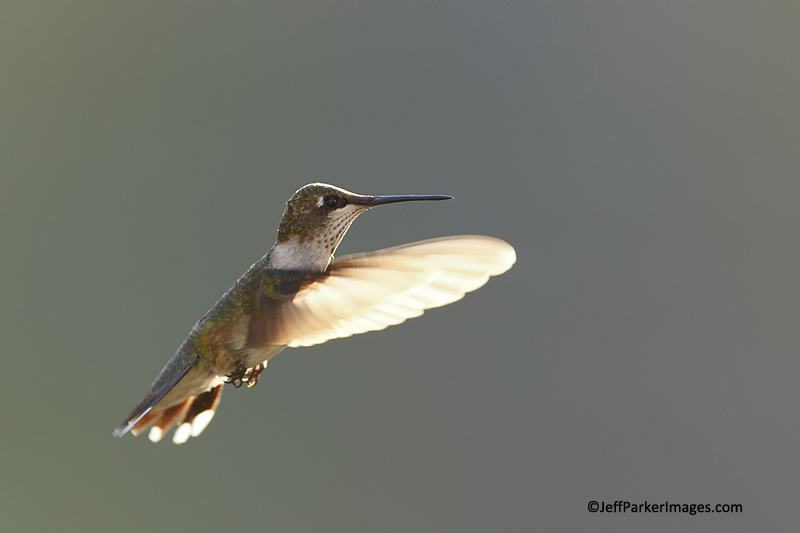