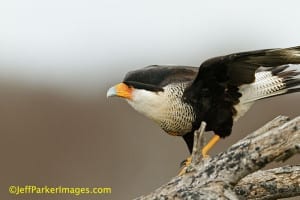 This boldly patterned raptor is one of the many south Texas specialty birds popular with birders and photographers. The Crested Caracara (Caracara cheriway), sometimes called a Mexican Eagle, acts like a vulture and is classified as a falcon. The Crested Caracara is the only Caracara species to be found in the United States. It ranges from southern Arizona, central Florida and central Texas south to Brazil.

The Crested Caracara is not only bold in pattern, but also in behavior. It will frequently drive away the less aggressive vultures, such as the Black Vulture seen exiting the above photo. While Turkey Vultures will thoroughly check out the scene before landing, Caracaras often just drop right on in. With their long legs Caracaras spend a lot of time on the ground. Sometimes they will approach carrion on foot. As I’m scanning the sky waiting for one to appear at the bait one will casually come strolling out of the brush. 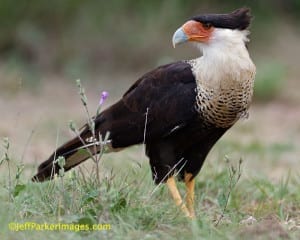 As they readily come to any type of meat set out for bait, Caracaras are fairly easy to photograph in south Texas. Nevertheless, these colorful birds of prey are always fun to watch and photograph.

UPDATE:  I thought I’d add some more to this post as, since I first published it in 2012 we’ve had a book come out that includes these birds (Explore Texas:  A Nature Travel Guide).

Here’s some of the text from the book about these really cool birds:

Bright orange feet, a thick, sturdy, light-blue bill, black and white body feathers, and a clustered black batch atop the head (the ‘crest’) make them easy to recognize.

Featherless facial skin reflects “moods,” and ranges from pale yellow to red to blue—relaxed, stressed, or angered, respectively.  Long legs and flat-footed talons allow them to run and walk more competently than other North American raptors.

During breeding season, genders court one another by belting out rattling calls while throwing back their heads so far that their yellow crops protrude.  Pairs mate for life and share in the raising of 2-3 young per year.  Crested Caracaras make the only falcon-family members to create nests, which they often begin building two full months ahead of egg-laying.

Rodents (especially packrats), insects, and carrion fuel these birds.  Vulture vomit’s on the menu, too.  In fact, Crested Caracaras often harass their fellow scavengers into regurgitating in order to partake of a ready-made meal.