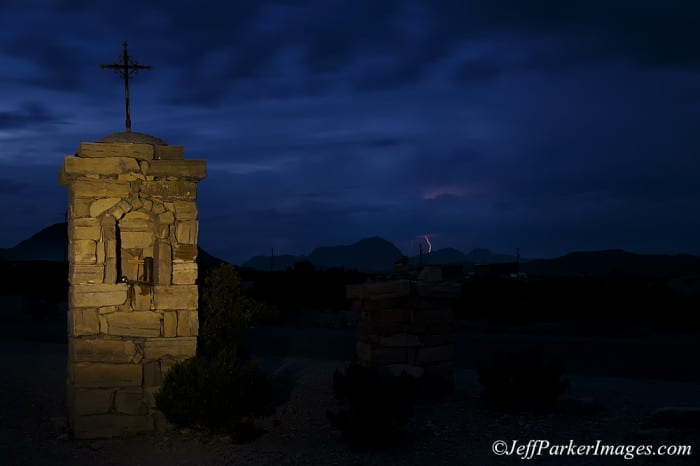 This year’s Big Bend Photo Tour took place over the second weekend in April 2015. I have never seen the park so green nor have I ever witnessed the profusion of wildflowers that we had. We couldn’t have timed the tour better!

We started this year’s Big Bend Photo Tour with a light painting session at the Terlingua Ghost Town cemetery. Finding a good composition during the day in the cemetery was a bit of a challenge due to the cluttered nature of the setting. But, once it grew dark, it was much easier as the only subjects visible were the ones we chose to light. As a bonus there was a distant thunderstorm this evening and we had fun working the lightning into our shots. 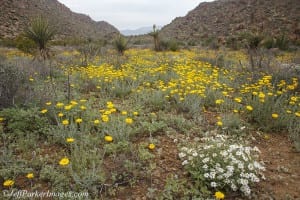 The first full day of the tour started with a pre-dawn hike. A couple of the participants had been to this general spot before, but never had they hiked it in the dark to be in place for sunrise. Unfortunately, the sunrise did not cooperate and we had a grey dawn. This turned out to be a theme for this year’s trip– a tradeoff for the vibrant wildflowers, I suppose. Folks still got nice shots light painting the rock formations. We then turned to tighter compositions that minimized the sky.

Most of the group headed across the border for lunch in Boquillas. We enjoyed a very tasty meal at a very reasonable price. We met back up for an evening shoot in the Basin. Again, the sky did not cooperate with a large cloud obscuring the sun. However, the sky above was clear and once it got fully dark our attention turned to Milky Way images.

Sunrise on Day Two had a bit more color. We had a lot of fun creating classic Big Bend shots with agave foregrounds and the peaks of the Chisos in the background. Some of the best shots of the trip came from this shoot. 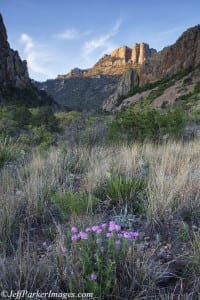 After lunch I had scheduled an optional hike to the Chimneys. It’s 2.5 miles one way and takes about an hour to do this hike in each direction. All but one opted to join me. As I drove to the trailhead in a rainstorm my thoughts were that I would have to cancel the hike. But, once at the trailhead I found very willing participants. The sky there had cleared so we headed out across the desert.

Mother Nature had other plans. As we neared the midpoint of the hike it became apparent that another storm was approaching. Being photographers, the group was strung all along the trail as folks stopped to photograph whatever caught their fancy. I advised the people furthest along on where to find shelter and went back to gather the stragglers.

As I gathered the last photographer the sky grew VERY ominous. Dark with a prominent roll cloud approaching. I figured we had about ten minutes before it broke loose. It so happened that we were about ten minutes away from the rock formations where I knew we could take shelter. The storm hit right as we got to the rock. 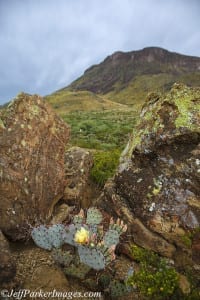 After the storm ~ ©Jeff Parker

It was touch and go for a minute as I really thought the wind might take me off my feet! I would estimate that the wind was at least 70mph for a couple of minutes. Crazy!

Once under the rock shelter we stayed dry and sat out the storm. I think this experience ended up being the highlight of the trip for those that were there. One photographer even donned himself with a new nickname due to his storm-shelter: “Caveman.” 🙂 After the storm we had fun exploring around the formations and taking photos.

Flowers, storms and stars. Big Bend is always a treat!