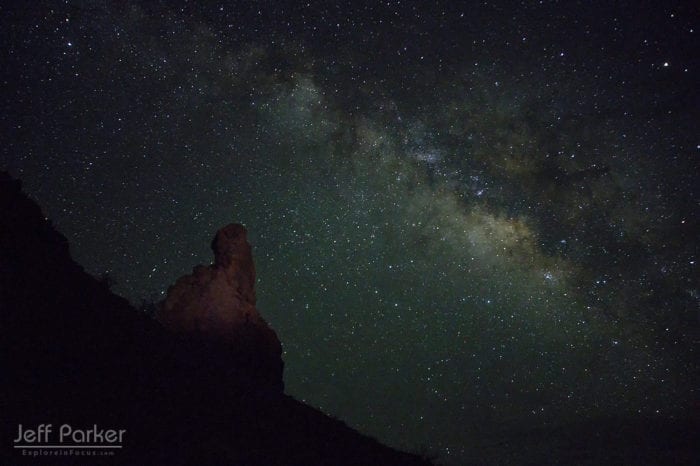 As both a nature lover & nature photographer, Big Bend National Park is one of my all-time favorite places. I lead a tour there just about every year because I really enjoy showing other photographers — and nature lovers — some of my favorite spots.

As one of America’s least visited National Parks, Big Bend is an often overlooked gem. One of the reasons it gets overlooked is also one of the things that makes it so special:
~~ Big Bend National Park is not close to -— or on the way to -— anywhere. It is remote. You have to want it. This remoteness gives Big Bend its special character and some of the darkest skies in the continental U.S.

WHY You Should Go

Big Bend National Park was the world’s very first Gold Tier International Dark Sky Park. In 2012, the International Dark-Skies Association, a Tucson-based non-profit dedicated to more thoughtful use of light at night, awarded the honor to the park. To receive such designation a park must have a Bortle Class rating of 1, 2, or 3. The scale ranges from 1 (pristine night skies) to 9 (strong light pollution). With a Bortle rating of 2, Big Bend’s night skies rank nearly pristine.

Naturally, this makes it a fantastic location for night photography!

However, that’s just one facet of the park. Thanks to its location on the border with Mexico, Big Bend rates high in biodiversity. The Rio Grande River, Chihuahuan desert and Chisos Mountains make up three different environments for a wide variety of animals and plants.

This location means that several bird and butterfly species normally found only south of the border can be found here. In fact, more bird species have been recorded at Big Bend than any other national park. One, the Colima Warbler, breeds nowhere else in the United States.

Another great reason for making Big Bend National Park your photography destination stems from why it became a national park in the first place: its distinctive landscape. The Chisos Mountains make up the only mountain range to be wholly contained within a national park. Their scenic beauty, along with the other formations in the area, were the motivation for the creation of the park.

With its unique geology, Big Bend provides lots of turns, twists, grooves, and ridges to make your lenses happy. Diverse terrain abounds here, from 500 million-year-old formations, to evidence of the shallow sea covering this land some 135 million years before, to the dunes at Boquillas Canyon, which remain under perpetual construction.

Add it all up and Big Bend National Park makes for a great nature photography destination!

WHEN You Should Go

Though you’ll find plentiful photo subjects year-round, putting some thought into your main photography goal during your visit helps pinpoint the best time for your visit.

Keep in mind that this is a desert environment. That means summers run HOT! You’ll encounter the highest temperatures typically in late-May and throughout June with average highs in the mid-90’s. Later in the summer, monsoon rains tend to make July and August slightly cooler with averages in the low 90’s. Bring plenty of water! If you plan to venture away from the paved roads, make sure somebody knows where you’re going and when to expect you back.

If Milky Way photography is your goal plan for the heat as May through August is when it’s most visible.

If bird photography is your thing April is a wonderful time to be in Big Bend! Peak of migration is difficult to pin down, but the last two weeks of April are a good bet.

The summer breeding birds (including the Colima Warbler, Mexican Jay, Varied Bunting, Painted Bunting and Vermilion Flycatcher) usually show up by the end of the month. 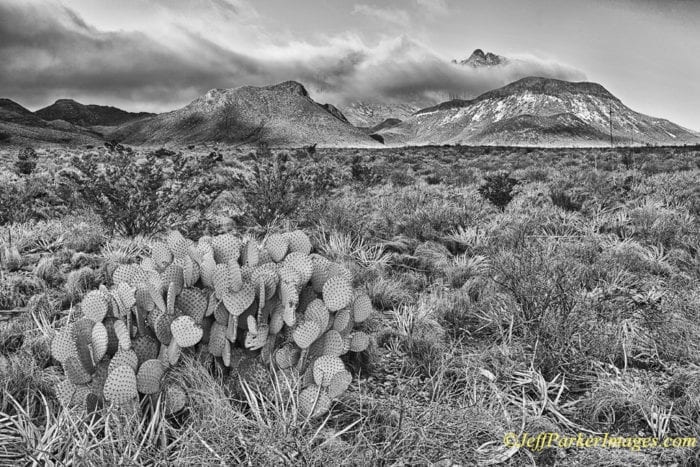 You’ll find the most hummingbird diversity in the Chisos Mountains in August. Lucifer, Broad-tailed, Magnificent and Black-chinned Hummingbirds are some of the species present in late-summer.

Spring wildflowers are unpredictable in Big Bend, but a wonderful surprise when you encounter them! If rain has been both plentiful (relatively speaking) and timed right the desert will burst into bloom. This phenomenon occurs in late February through March, while ocotillo usually produce their tubular-shaped red blooms after a rain any time of year. The creamy yucca and gorgeous cacti flowers are more dependable and your best bet of photographing these thorny bloomers is through April and May.

Fall makes a rather subtle appearance in Big Bend. Near the Rio Grande or other water sources, cottonwood leaves turn a bright, clear yellow and some of the oaks in the Chisos also flaunt a bit of color.

Pleasant weather makes up for the park’s overall dearth of fall color. Expect generally clear skies with warm days and cool nights. Autumn is a great time for hiking and enjoying the solitude of the park.

Winter weather is erratic in this region so it’s best to be prepared for anything. Although generally cool days and chilly nights prevail, it can get downright cold with temperatures in the teens. Occasionally the park even gets snow. Or it could reach the 80’s even in the heart of winter. This season marks the time of highest visitation. 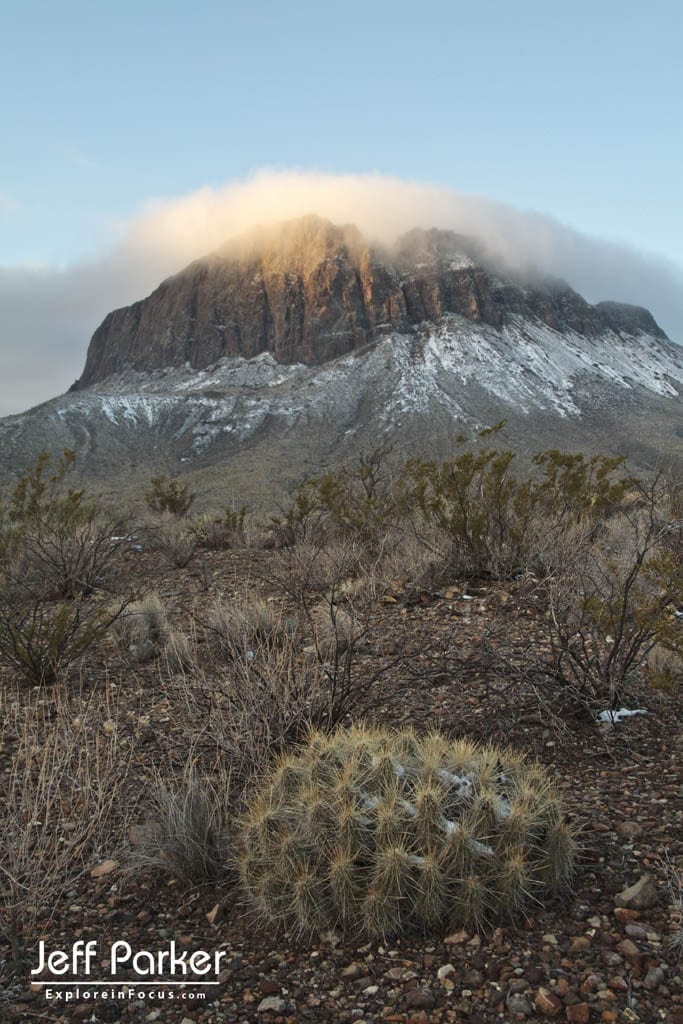 The park experiences its largest crowds a couple times a year. The largest visitor spike occurs during spring break. In Texas, this generally falls during the second full week of March. You’ll find camping spots full and trailhead parking areas closed due to excessive vehicles. Thanksgiving is the other high-visitation time, although it’s not as crowded as spring break.

The sweet spot between good weather and few people is October through mid-November.

WHERE You Should GO

Big Bend is big. At nearly a million acres -— 801,163 to be exact -— the park is about 24,000 acres larger than the state of Rhode Island. It takes nearly two hours to drive from one side to the other. Avoid too much driving back and forth by taking some time to plan your visit before you arrive.

When planning, think of the park in terms of a west side and an east side. The Chisos Mountains and the Basin are in the middle.

On the east side, Rio Grande Village is a great place for wildlife photography. Resident javelinas and roadrunners are fairly easy to find. (Javelina, by the way are NOT the same as feral hogs.) And, with the river and wetlands, Rio Grande Village has the most bird diversity in the park. This area also provides dramatic views of the Sierra del Carmen Mountains of Mexico at sunset. The road to Rio Grande Village makes for good morning light upon the Chisos.

The Basin is in the heart of the Chisos Mountains. Higher and cooler than the surrounding desert, the Basin hosts a very different community of birds. This area is best for hummingbirds and is also where the majority of black bear and mountain lion sightings occur. Sierra del Carmen white-tailed deer frequent the trails surrounding the campground (Mule deer aren’t as numerous and are mostly seen in the lower areas). Sunset from the Window View is a must-do for any Big Bend first timer.

The west side of the park is accessed via the Ross Maxwell Scenic Drive. This drive takes you past a never ending parade of land forms and rocks. A geologist’s paradise! Landscape photo opportunities abound on this road. These same formations also make great foreground elements for your night sky photography. The road ends at Santa Elena Canyon, a great spot for morning photography; plan to get there at first light!

WHERE You Should STAY

Lodging inside the park is limited to the Chisos Mountains Lodge or camping. If you plan to stay at the lodge, I highly recommend making reservations far ahead of time. Rooms are limited fill fast!

The park hosts three developed campgrounds with spaces for motorhomes, trailers or tents. These campgrounds have water and electricity at the sites and bathrooms (some are pit & some are flush toilets). Some campgrounds, like Cottonwood, require that all generators be turned off after 8:00 pm. In addition there are numerous back country drive-up campsites, some reachable with a regular passenger car. These sites are primitive and consist pretty much of a cleared, level spot to pitch your tent. No facilities whatsoever. But the tradeoff is quiet and solitude (in most cases; some of these primitive spots have two spaces next to one another). Of course, you may also choose to backpack in which case your choices are almost limitless.

You’ll find motels and campgrounds just outside the west boundary of the park in and around the small communities of Study Butte, Terlingua, and Lajitas.

Lodging there for the most part is nothing fancy but serves as a handy base for exploring. The area also provides a few restaurants, a store and gas station. Just be prepared for a two-plus hour drive from here if you wish to visit Rio Grande Village on the far side of the park. 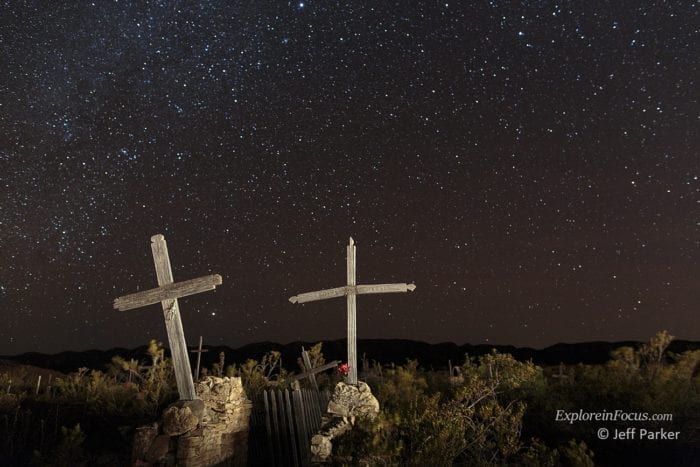 Big Bend National Park is my go-to place when I need a dose of awe. Of course, I always come home with great images, too. I encourage you to make the effort to visit this special place tucked down into a corner of our country.