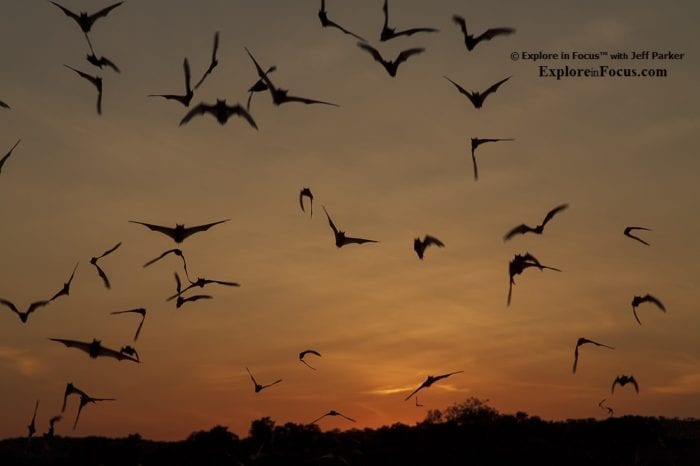 Bat viewing in Texas heats up in the summer, especially in August.

Bats live on every continent except Antarctica. Of the 1,000 or so unique species worldwide, 70% eat insects. In Texas, we have 32 species of bats statewide. (Learn about 10 of them here.)

As warm-blooded mammals, Mexican Free-tailed Bats give live birth. Females only give birth to one young per year, which they’ll nurse for 6-10 weeks. Males stay on just long enough to mate with any available females before heading out to form colonies of their own (called “bachelor colonies”).

Females give birth, usually in June, to a single hairless pup. Newborns arrive weighing about a third the weight of their mothers (that’s akin to a human birthing a 40-pound baby!). Each pup has a unique scent and sound so its mother can identify it.

Within about 4-weeks pups fly and, by usually at 5-6-weeks of age, they join “Mom” in nightly food forays. In late-July, you’ll likely notice juveniles practicing flight. See a furiously flapping bat and you’ll know you’ve spotted one!

In Texas, Mexican Free-tailed Bats chomp an average of 300 tons of bugs from dusk to dawn! By weight that equals about 150 SUV’s — PER NIGHT! That’s a lot of mosquitoes among other insects that we don’t want to get out of hand.

As Mexican Free-tails forage they eat lots of moths, particularly Corn Borers, one of the nation’s most virulent agricultural pests, which rank only second to Boll Weevils in total pounds of pesticides used in control attempts. Texas bats save Texas’ farmers millions of dollars a year in lost crops.

As long ago as 1917, the Texas Legislature recognized this important service by creating the first and, then, only, known law protecting them. The law made it a misdemeanor to willfully kill or injure the mammals.

Ready to take advantage of this awesome natural phenomenon? Here are three of mine and Mary O.’s favorite bat viewing sites in Texas:

With small crowds & close views, this spot provides an intimate bat-viewing experience. Learn lots from on-site interpretive signage while waiting for the 250,000 (or so) mammals to emerge.

Down the slope, at the bridge’s bottom edge, listen to the singular sound of thousands of chattering bats readying to rouse (think: crickets on steroids!).

Get best views of exiting bats from atop the bridge. The summertime stream lasts at least ½-hour.

Many fly across Allen Parkway, sky-mingling with sky-rises, generating a unique juxtaposition of nature and steel. Others bolt over the bayou and a nearby Magnolia-treed area. Head toward those trees, going left at the circular sidewalk; there, as the bats swoop low for insect meals, they come mere inches from the top of your head…a super cool experience! 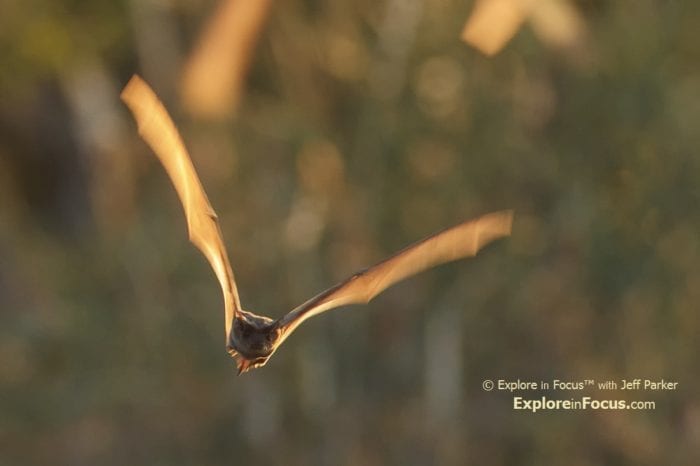 Some of the bats live here year-round, but the longest exiting stream occurs in late-August when mothers & pups all fly (emergence can last an hour). Bridge-top offers the best bat viewing when the mammals first emerge.
http://www.houstontx.gov/parks/batpage.html

At dusk, a seemingly endless supply of bats streams forth from a pit stretching down 2,000-feet. The hole houses an estimated 12-million flying mammals, comprised primarily of three species.

Most are Mexican Free-tailed Bats, which arrive each spring to breed, staying-on through early-fall to raise their young. In-midsummer, after giving birth to most of the pups, the population peaks here as it does elsewhere in Texas.

Sunsets laden with Hill Country color escort you into prime time; the moment the sun dips below the horizon the flow of this fauna really heats up!

Don’t leave early even though much of the crowd does or you’ll miss the best part! Moments after sunset brings most activity. Stand near the cave’s opening where bats zoom best overhead & catch wind from their wings.

Rocky seats afford sitting space, but your own chair will make your experience much better. Also bring a hat, umbrella (for shade & poop protection), and sunscreen. Temps get hot! Sunglasses a must as you’ll look into the sun. Cold drinks a good idea, too.

On your drive in, look for Armadillos, Rio Grande Turkeys, & White-tailed Deer. When leaving in dark watch for the sparkling orange eyes of Chuck-will’s Widows on dirt road.
http://friobatflight.com 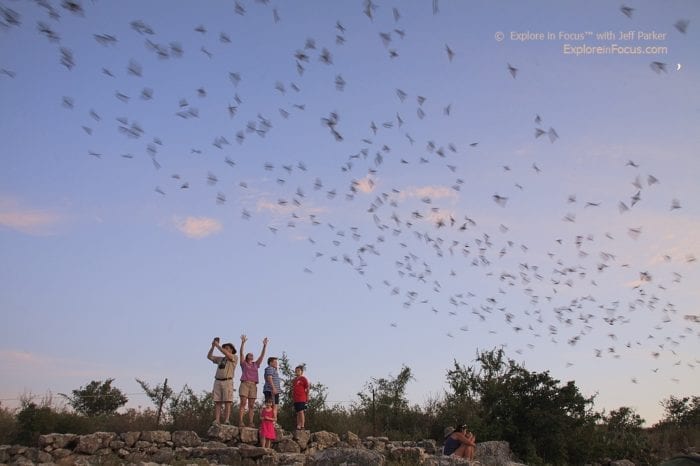 It begins as a trickle, but eventually turns into a swarm each summer night in downtown Austin when more than 1.5-million Mexican Free-tailed Bats leave their daytime roost –— the crevice-filled Congress Avenue bridge —– to sally forth in search of supper.

The festive atmosphere at the site of North America’s largest urban bat colony makes even waiting great fun. A sense of anticipation fills the air, as children run and play in the lawn, friends laugh, and families and couples munch on picnic dinners.

Once dusk descends, watch the bats stream forth non-stop for at least an hour. 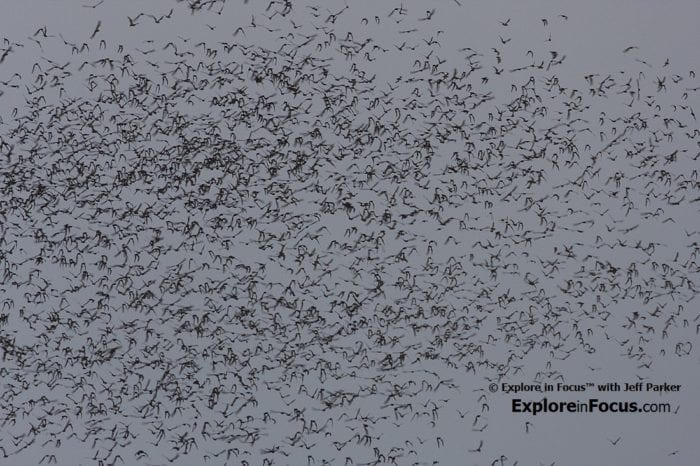 Bring a blanket or a chair for lawn locations, placing chairs to rear of viewing area so as not to block others. Consider the clock when making your plans as bats don’t come out until right at dusk and you’ll be waiting in summer heat. Hat & lightweight water-resistant jacket are good ideas for guano protection, though we’ve never really had an issue.

The bridge above offers a different view; sometimes better, but often dark water below makes bats tough to see — and photograph. The side closest to the Four Seasons Hotel offers the best bridge location.
http://www.batcon.org/index.php/our-work/regions/usa-canada/protect-mega-populations/cab-intro